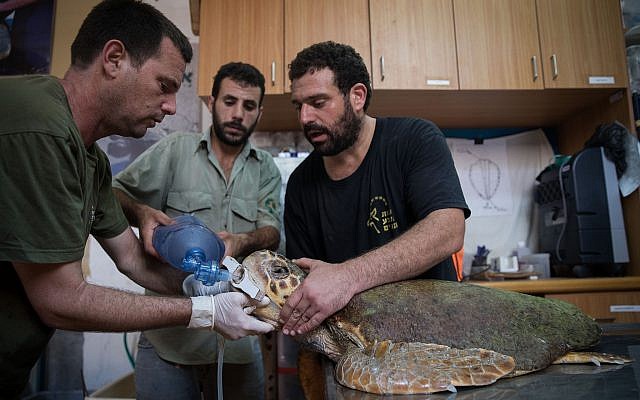 Israel’s Sea Turtle Rescue Center rescued 15 sea turtles in recent weeks after dozens were found washed up on shore on Israeli beaches after a storm. About 20 had died. Normally over a course of a year the crew surveys about 250 turtles coming to shore. Within 3 days some 46 were counted, according to news reports. The terrible reason was eventually uncovered: an Italian crew had set off 20 underwater explosions hoping to find oil and gas in the Mediterranean Sea.

Piles of volunteers rushed in to help comb the coast for the sea turtles suffering from lung and internal cavity damage. Not only did the volunteers search, they also rescued the massive creatures helping carry each one back to the rescue vehicles. An average one weighs about 200 kilograms or more than 400 pounds. The Turtle rescue center director Yaniv Levy told a local news channel Hadashot that some of the turtles had fluid, including blood, inside their lungs. Green Prophet could not reach him for comment. Marine vets rushed to the center where they set up a makeshift hospital to treat the turtles using both CT scans and X-rays to understand the injuries. Surgery was done when necessary. Only 15 turtles could be saved and now the turtles face a rehab period of up to a year. “I am quite sure we can put them back [in the sea],” Levy said.

At first the injuries were a big mystery then the Israeli Nature and Parks Authority figured out the likely culprit: an Italian marine seismic survey looking to find offshore oil and natural gas reserves in the Mediterranean Sea.

There were 20 explosions set off within 24 hours, as the survey researchers mapped the ocean floor.

The loggerhead and green sea turtles lay their eggs along the Israeli coast, and are greatly affected by environmental disturbances. Garbage and development along the coast is also putting the populations at risk, says the Sea Turtle Rescue Center.

Seismic airguns are used to find oil and gas deep underneath the ocean floor. Airguns are so loud that they disturb, injure or kill marine life, harm commercial fisheries, and disrupt coastal economies. Seismic testing is a process to create an image of the subsurface. The data obtained is then used by the oil and gas company to locate the most optimum place to drill for gas.

According to the NGO Oceana, seismic airgun testing currently being proposed in the Atlantic could injure 138,000 whales and dolphins and disturb millions more. Sea turtles are ancient reptiles, and fossil evidence reveals they have existed for over 150 million years. The last 100 years have seen a sharp drop in sea turtle population size. This decline is the result of fishing and damage to beaches and nesting sites. The damage has been so severe that the International Union for Conservation of Nature and Natural Resources (IUCN) has declared all species of sea turtle endangered. In 1999, the Israel Nature and Parks Authority established the Israeli Sea Turtle Rescue Center in temporary quarters at the Mevo’ot Yam marine boarding school in Mikhmoret. The center’s vision is for treatment, conservation and rehabilitation of sea turtles in the eastern Mediterranean. The center was established as a temporary facility to provide emergency treatment for injured sea turtles, but has grown beyond expectations over the last years it has been in operation. A new center is being planned for Israel and is pictured above.