Last May, Lebanese lawmaker Walid Jumblatt called for marijuana to be legalized in Lebanon. While he never touched the weed himself, he said, “I support growing cannabis for medical use and to improve the living conditions of farmers in north Lebanon and the Bekaa Valley,” according to the Daily Star.

Now he’s back in the news seeking legal acceptance for the cultivation, sale and consumption of pot. (Read down in the article if you are curious about the tolerance levels for marijuana in the Middle East.)

“It is time to allow for the cultivation of marijuana, and to drop the right to issue arrest warrants against people who work in this field,” the veteran Druze leader recently Tweeted.

According to the French news agency AFP, Lebanon had generated hundreds of millions of dollars from marijuana cultivation during the country’s civil war (between 1975 and 1990) before the government began to put a lid on the pot industry.

AFP now reports that, in recent years,  Lebanon’s cannabis growers say business has boomed in large part to the Syrian war which has deflected government attention from drug crimes. Demand for the drug in Syria has jumped more than 50 percent since 2012, a year after its civil war began, and porous national borders enable Lebanese producers to meet growing demand. Good news for “farmers”.

So what’s the word on weed across the rest of the Middle East? 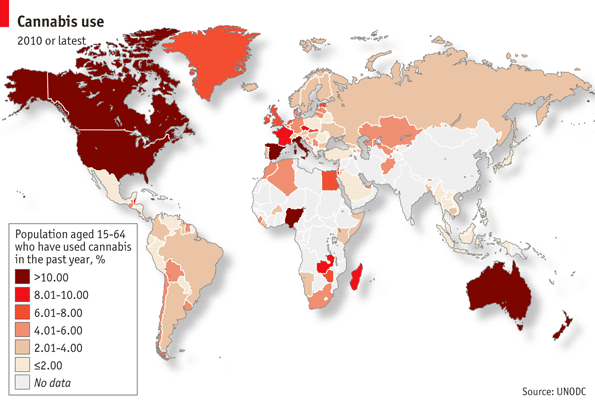 The Middle East’s appetite for Marijuana is negligible compared to North America or Australia, but the drug has a string following and – along with hashish – is broadly acceptable given a centuries-old link with communal cultural ritual within some faiths.

The deal on marijuana in the Middle East

Marijuana is technically illegal in Egypt, but use is widespread and widely accepted and convictions for personal use is rare.

Israel allows usage of medicinal cannabis, and recreational use – while illegal –  is relatively decriminalized,  with little or no penalty for convicted first time violators.

Marijuana cultivation, sale and use is not legal in Jordan, but enforcement for personal users is relatively lax.

Lebanon outlaws pot possession, however, large amounts are grown within the country and recreational use, so long as it is discrete, is rarely an issue.

Saudi Arabia cracks down on use and possession for personal use of any recreational drug.  If caught, you face up to six months jail time. Dealing and smuggling drugs usually result in harsher prison time or even execution. Foreigners who use drugs face deportation.

Syria similarly bans recreational drugs and, under Bashar al Assad, many cannabis offenses, from simple use to trafficking, are punishable by life in prison. Despite the risks, there are reports that people living in areas controlled by Kurdish separatists increasingly cultivate marijuana as one of the few means to create income in this Syria’s debilitated economy.

Turkey‘s laws prohibit possessing and using pot. Get caught and face 1–2 years in prison; or opt for a rehabilitation program and/or lengthy probation. for up to three years. Supplying and selling the drug is punishable by 5–10 years in jail, and growing and trafficking get you a minimum term of 10 years. Thinking of a Turkey toke?  Suggest you re-watch the old movie Midnight Express.

United Arab Emirates laws belie it’s modernist reputation: even the smallest amounts of the drug can lead to a mandatory four-year prison sentence.

Got some real-life perspective to add to this survey? Drop us some comments and let’s begin a dialogue. What’s the real word on marijuana in the region?