No need for irrigation, the Groasis Waterboxx yields plant growth in deserts and on rocks

Have you ever wanted to grow trees without actually planting them? The Groasis Waterboxx is a Jordanian invention that will do just that. Launched in June 2011, the Groasis nurtures a sapling’s growth without the hands-on fuss of shovelling soil and topping up water. With hopes to see it distributed throughout famine struck East Africa, the Groasis Waterboxx could be one solution to natural food shortages.

The Groasis Waterboxx was introduced by AquaPro Holland, founded by the inventor Pieter Hoff. It uses a principle of ‘biomimicry technology’, an artificial copy of the way nature shelters seeds in humidity to grow in the most eroded sites and deserts without human intervention. Groasis inventor Pieter Hoff is happy with his vegetable results

By planting young trees upright in the container roots remain intact and are encouraged to grow even at night when temperatures drop. An ergonomically designed box means condensation forms quicker inside – known as a water harvesting technique – and an insulation plate helps channel more water to the plant, continuously feeding growth. A great ‘infographic’ style animation shows how the Waterboxx is the best micro-climate for plants. 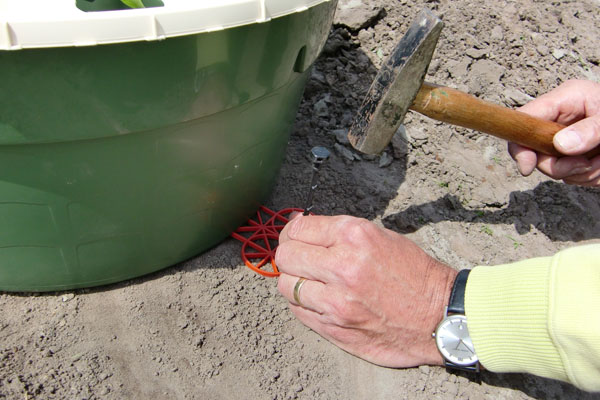 After loosely planting a young tree near the soil surface, the paper board tags around the plants to prevent water evaporation.

An isolation plate fits into the green base of the Waterboxx which is placed over the plants and nailed at the edges using wind protectors to keep the base sturdy and supportive. 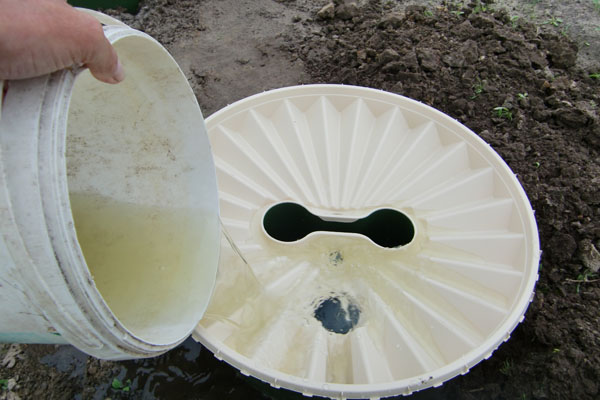 Water supply does not need constant topping up

Both the base and lid have large enough tubed holes for the plants to grow and receive sunlight.

Finally, a ridged cover is clicked on top with a water hole allowing up to 5 gallons of water to fill the entire Groasis Waterboxx without flooding.

A blue sifon is threaded through the lid and capped shut, acting as a controlled water supply to feed the plants.

Groasis technology could potentially improve farming techniques and provide food supplies in famine struck regions such as the ‘horn’ of Africa.